Today’s economic situation puts food security at a premium. Between skyrocketing fuel prices and shortages of fertilizer, getting enough fresh produce from farms in the Southern and Western United States to markets in the Midwest and East is increasingly a challenge. Households should consider creating their own food security system, and one method for doing so is to install edible landscaping.

Edible landscaping incorporates fruit, vegetables, and edible flowers as the major part of the landscape design. The beauty of edible landscaping is multifold; it enhances the appearance of the property, provides a steady source of food, and maximizes the use of even the smallest lot.

Many vegetable varieties, small fruits, and tropical fruits can be grown in pots, so apartment and condo dwellers can still think in terms of beautifying their outdoor spaces with edibles instead of the usual geraniums and petunias.

• The visual — things such as plant height, flower and leaf shape and color, and the appearance of the fruit.

• The seasonal — when do the plants flower and bear fruit?

• The duration — how long will the plant grow and produce?

Perennial plantings, such as asparagus, will produce a crop during one season and offer foliage for the rest of the growing season. Short-season vegetables, such as beets or Swiss chard, will need to be swapped out after their peak season is over. Annual and perennial herbs provide visual interest and a crop of flavorful leaves as soon as they go into the ground.

See also  The Calming Powers of a Weighted Blanket

Coordinating the landscape so that it works without becoming too labor-intensive is a little like choreographing a ballet. For example, beets and leaf lettuce are best grown during the cooler months, so they are at their best in early spring and early fall. In between, the space can be filled with short-duration summer crops such as summer squash, cherry tomatoes, and/or annual flowers.

Vegetable plants can be quite beautiful. Both the flowers and the vegetables they produce are colorful and in some cases, have unusual shapes that add to their visual interest. Many annual vegetables such as beets, leaf lettuce, determinate tomatoes, and peppers can be grown in containers as well as in the ground.

Asparagus — The asparagus plant is a perennial that provides succulent spears in the spring, followed by ferny foliage. The foliage can grow to 4-5 feet tall and is a natural hedge or screen.

Eggplant: Eggplants are a warm-weather vegetable that has both visual and tactile elements. The leaves and flowers of the eggplant are fuzzy, covered with tiny hairs that are somewhat bristly to the touch. The star-shaped flowers vary in color, from deep lavender to white depending on the eggplant variety.

Different varieties also have different colored and shaped fruit; the older varieties bear the deep purple, ovoid eggplant, while some of the newer varieties come in white, purple, and white-striped and lavender, and they may be long like a cucumber rather than round or oval.

Beets: Even though the “vegetable” part of the beet grows underground, beet greens are highly colorful and showy. Those greens are also edible, so the beet is a dual-purpose vegetable as well as an attractive one. Beet varieties produce roots that are deep red, gold, and white, and the greens are often mottled and striped with the root color.

Peppers: Whether sweet or hot, pepper plants provide stunning visual impact with flavor galore. The plant itself grows to 2 1/2 to 3 feet tall, with branches that extend a foot or more. The leaves are deep green and somewhat glossy. The peppers themselves can be oblong, round, or pointed, and colored green, red, gold, orange, or purple.

Swiss Chard: This leafy green is a wonderful substitute for spinach. The leaves can be eaten raw or cooked, and they are heavily textured, which adds to the visual impact. The stalks of most varieties resemble rhubarb and are a deep reddish-purple color. The variety Northern Lights has a broader array of colors, coming in golden yellow, orange, light purple, and bright red.

Leaf Lettuce: Lettuces have been part of the kitchen garden since the Middle Ages, and many of the heirloom varieties of leaf lettuce have foliage dabbled with red and gold. Oakleaf lettuce offers a different leaf shape as well. Lettuce is a good vegetable to grow outdoors in early spring and late fall, and it can be grown in pots. Keep the leaves coming by snipping the leaves regularly for salads.

Squash: Squash plants serve two purposes, as both the flowers and the vegetables they produce are edible. Smaller landscapes can utilize bush varieties of summer and fall squash, while larger areas can accommodate vining squash. Squash vines can also be trained against a heavy trellis and used as a privacy screen.

Peas and beans: These popular legumes grow upright and can be trained onto a trellis, a teepee made of tall poles, or other structures. This means that a lot of plants can be grown in a small amount of ground area. The flowers of both peas and beans are similar to their ornamental cousins, wisteria and sweet peas. Depending on the variety, flowers are either white or pink. Both produce several harvests during the growing season, as long as the pods are picked regularly.

There are many ornamental flowers that were originally grown as food and have been grown in traditional cottage gardens since the Middle Ages. Some of these adapt well to growing in pots or in hanging baskets.

Rugosa roses: The Rugosa rose is a June-bloomer that bears large, five-petalled flowers in pink and lavender. The flowers have a traditional rose fragrance, and the petals are edible; candied rose petals are often used to decorate cakes. The fruit (seed pod) of the rugosa rose is called a “hip” and is used in herbal teas. Rose hips are tart-tasting and have very high vitamin C content. The original rugose rose is bright pink, but there are some hybrids on the market that have flowers that are deep pink and magenta.

Nasturtiums: The Latin name “nasturtium” translates to “nose-twister,” and some might find the fragrance of the flowers off-putting. But nasturtium flowers and leaves have a peppery flavor and can be used to top salads or added to cream cheese for a spicy spread. The climbing nasturtium (Tropaeolum) bears large seed pods that can be pickled into capers.

Violets: The johnny jump up (Viola tricolor) is a native flower that is able to grow in both sun and shade. The flowers have a wintergreen taste, and often are candied and used to decorate cakes and cookies. Violet flowers can also be added to salads.

Calendula: Also known as pot marigolds, the bright gold calendula has a saffron-like flavor. This annual grows easily in most garden soils and self-sows freely.

Small fruits are those that grow on shrubs or smaller plants. Strawberries, raspberries, gooseberries, and blueberries all qualify as small fruits, and these can easily be incorporated into certain landscapes. Raspberries, for example, make wonderful hedges.

Their thorns serve to discourage unwanted visitors, both human and animal. Blueberry bushes are very attractive, bearing dainty white flowers in the spring and growing only 4 to 6 feet tall, and they thrive in acidic and somewhat swampy soils.

Currants and gooseberries aren’t often sold at markets, so an abundance of these could supply the household with fruits for pies and jams, and any overage can be sold to others.

Strawberries are well adapted to container growing, and there are now hybrids that are small enough to grow in hanging baskets. Ground-grown strawberries tend to be labor-intensive, but well worth the effort for an abundance of juicy red fruit in the spring.

There have been varieties of apples and pears developed that are extra-dwarf, and there are strains that are called “spur strains.” Extra-dwarf trees grow only to 6 feet tall so are able to grow in a smaller yard. Since apples and pears are both self-pollinating, there needs to be only one tree to produce a crop.

See also  10 Tips to Maintain Your Air Conditioner This Summer

Spur strain trees were bred to produce an abundance of fruiting spurs or branches that bear fruit. These strains tend to stay compact while producing large crops of fruit. Many of these grow virtually upright, with the only branches being the fruiting spurs. They are adapted to growing in large containers or against a fence as espaliered trees.

Culinary herbs are a natural addition to the edible landscape.  Both annual and perennial herbs have foliage in various shades of green, and a few, such as the multiple basil varieties, offer red, bi-color, or purple foliage as well. In addition, herbs bear fragrant flowers that are magnets to butterflies and the all-important pollinator insects.

Herbs can be mixed into flower arrangements as fillers, the leaves and flowers can be dried or frozen for use in teas or cooking, and some, such as dill or cilantro, produce edible seeds as well.  Herbs in the mint family tend to be vigorous, and many annual herbs are self-sowing. Herbs are a treat for the eyes and the nose.

Landscaping with edibles is an ideal way to ensure a steady supply of fresh, fully ripened food that has been grown safely. Whether strictly organic or grown with a mix of organic and non-organic methods, the edible landscape is a pragmatic and sustainable way to beautify the yard as well as the neighborhood. 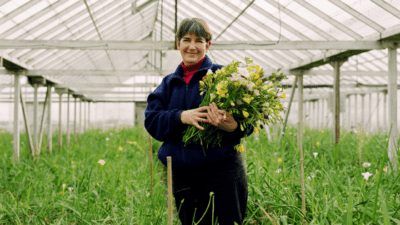 Ready to add a greenhouse to your home or business? Enjoy this list of the best selling greenhouses.