How to Sell a House with Foundation Problems

Foundation problems can have a huge impact on a house’s price on the local real estate market. As a result, people who are planning to sell a house with foundation problems will want to look up the potential implications for their sale proceeds as well as other relevant factors. Here’s more on what that process looks like.

Get Your Instant Home Value In This Free Report

**This post contains affiliate links and I will be compensated if you make a purchase after clicking on my links.﻿

It is natural for a house to settle in the sense of sinking into the surrounding soil. However, when this process happens to an excess, it becomes a foundation problem.

In short, houses can settle into their surroundings because the soil can move about, which is why it is so important that house-builders have contractors take a look at the local soil before proceeding with their house-building.

Unfortunately, extreme cases can cause serious problems such as cracking, water getting into the house, and jammed doors and windows, which means that interested individuals should act to correct them as soon as they notice the warning signs.

This is a common issue, so much so that one in four houses in the United States are expected to experience it to some extent.

Some examples of these warning signs include uneven floors, gaps showing up around exterior doors and windows, and cabinets and counters separating from the walls.

What Causes a House to Settle?

In most cases, a house settles because the house-builder failed to backfill the soil in the right manner, meaning that it isn’t compact enough and strong enough to support the weight of the structure.

However, there are other potential causes, with examples ranging from a water leak that is causing the soil to soften to the house sitting on a kind of soil that changes in volume because of its moisture content

What Are Signs of Structural Damage to a House?

There are numerous signs of structural damage that can show up. Single houses aren’t guaranteed to show all of them, but it isn’t uncommon for single houses to show a number of them. Examples of Structural DamageSome examples include but are by no means limited to uneven floors, dampness in the subfloors, cracks in the walls and ceiling, exposed gaps between internal and external walls, and doors and windows that no longer seem as though they fit into their intended places .

Can You Fix Foundation Problems?

Foundation problems can be fixed.

However, it tends to be better for interested individuals to get their foundation problems fixed sooner rather than later.

This is because foundation problems will cause damage to the house, meaning that waiting will result in a bigger repair bill.Go to top

Foundation problems can have a huge impact on a home’s fair market value. It should come as no surprise to learn that foundation repair can have an effect as well.

Unfortunately, predicting the exact effects is much easier said than done. Having foundation problems repaired by a reliable and reputable contractor in the region should satisfy most potential home-buyers.

There might be some people who will be scared off by even the suggestion that such things can happen.

Combining repair by a proven contractor with a warranty should be more than enough for most potential home-buyers, so much so that it can actually increase the home’s value in some cases.

Most homeowners insurance policies will not cover foundation problems.

However, there are potential exceptions should the foundation problems be caused by something covered by the homeowners insurance policies, whether that means flooding, earthquakes, or broken plumbing resulting in water seepage.

Due to this, people who are concerned about potential foundation problems need to pay very close attention to what is and isn’t covered by their homeowners’ insurance policies so that they won’t get blindsided by something that they thought they were protected from

How Much Does It Cost to Fix the Foundation of a House?

Home Advisor claims that the average cost of fixing foundation problems is $4,074 in 2019, which is national rather than regional in nature.

There can be significant variation depending on the exact scale of the problem, seeing as how said source provides a range of $1,847 to $6,439.

See also  Seller Late Carrying Out Repairs? Save Your Closing Date With An Escrow Holdback

How Much Does a Foundation Inspection Cost?

The national average for a foundation inspection is about $310.

However, the figure that interested individuals will wind up paying can be either close to this, much higher, or much lower because there are numerous factors that can influence the final cost.

For example, bigger properties mean more places to look at, which in turn, means a higher cost.

Likewise, both additional services such as pathogen testing and additional effort such as having to enter crawl spaces can send that number shooting upwards as well.

Something that becomes particularly true when some companies choose to bundle foundation inspection service as a package with other services that might entice interested individuals.

Does a Home Inspection Include Foundation?

Home inspections will cover the foundations of the home.

As a result, while a home inspection can pick up on foundation problems that have produced visual signs of their existence, it won’t have the same success if those same signs are out of sight for one reason or another.

How Long Does a Foundation Inspection Take?

There are some claims that a foundation inspection can take as little as 1.5 hours.

However, this is something that can see a fair amount of variation, not least because some properties are bigger, meaning that more time is needed to check up on their foundations.

How Long Does a Foundation Repair Last?

There is no way to tell how long a particular foundation problem will take to repair until the relevant contractors have managed to perform a foundation inspection in preparation for getting started on the task.

Relevant factors include but are not limited to the location of the home, the kind of soil sitting beneath the home, and the kind of structure that has been built upon the site.

When Is a Foundation Crack Serious?

Homeowners should treat their foundation cracks in a serious manner.

However, some foundation cracks are bigger causes for concern than others, which should influence the exact enthusiasm with which they seek out help.

Vertical cracks with either no incline or a very slight incline are not particularly serious because they are caused by the foundation settling in most of the time.

In contrast, diagonal cracks tend to be more serious because they could be a sign of differential settling, which essentially means that one side of the foundation is settling lower than the rest of the foundation.

Unlike these kinds of cracks, horizontal cracks are always causes for serious concern because their existence speak of very serious problems that need to be corrected as soon as possible to prevent further damage.

Homeowners might be tempted to procrastinate a little with vertical and diagonal cracks, but that is always a bad idea when it comes to something as serious as a horizontal crack in their foundation.

How to Sell a House in Las Vegas 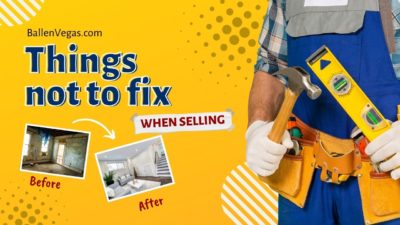 What Not To Fix When Selling a House

Fixing things before you put your house on the market can help increase your chances of getting a good offer, but there are some things you should avoid fixing. Here is what not to fix when selling a house. 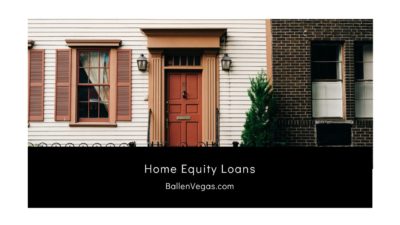 How Long Does it Take to Get a Home Equity Loan? 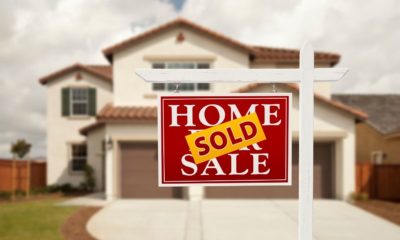 What is the Cheapest Way to Sell Your Home?

So, what is the cheapest way to sell your home? Let’s find out. After all, the less you have to pay, the more money goes into your pocket.